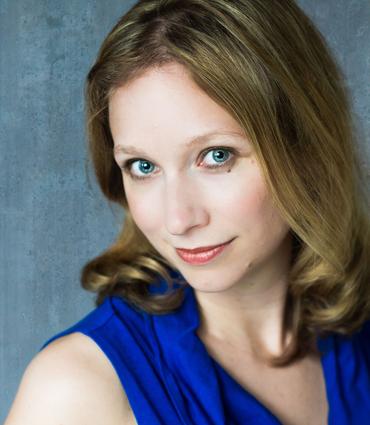 CATRIN ROWENNA DAVIES, director and mezzo soprano, is delighted to return to the Summer Garden Opera to direct La Traviata, following her success with previous productions of Il barbiere di Siviglia and Faust. Davies has been an opera professional since 2001. Described by the Baltimore Sun as having “bright vocalism and flawless diction,” she has established herself as a presence on the operatic and concert stage. Born in Washington, DC, and possessing British citizenship, Ms. Davies has lived and performed in the United States, Canada, and the UK.

A skilled singing actress, Ms. Davies was intrigued by directing, and pursued opportunities to explore that craft. In 2007, she started her directing career by assisting director Garnett Bruce in Peabody Opera’s Les Contes d’Hoffmann. That same year, she then directed the Old Maid and the Thief for Harbor Opera at the Walters Art Museum, and assistant directed HMS Pinaforeat the Young Victorian Theatre Company. After this auspicious beginning, she embarked on a successful regional career. Most recently, she directed Hansel and Gretel, the outreach production for the Peabody Conservatory, and Kiss Me Kate for Live Arts Maryland. She was also selected to be a part of the inaugural class of the Directors’ Studio at the Shakespeare Theatre Company, under the mentorship of Michael Kahn. Other recent highlights include: directing The Three Little Pigs, the educational outreach show for Opera Delaware, and assistant directing the world premiere of Bornfield’s Camelot Requiem. At Lyric Opera Baltimore, she has directed Jake Heggie’s At the Statue of Venus,and has also directed two outreach programs. At Live Arts Maryland, she has directed South Pacific, Man of La Mancha,The Fantasticks, Fiddler on the Roof, Oklahoma, Secret Garden, and HMS Pinafore, the latter for which she received the following accolade from The Capital: “The staging and directing was handled absolutely brilliantly by Catrin Davies…”

In the academic realm, Ms. Davies is a guest director at the Peabody Conservatory, has been a guest director at Harford Community College, and has been an adjunct professor at both Peabody and Towson University. She was also on faculty at the Road Scholar program (formerly Elderhostel), where she lectured on a variety of musical topics, particularly operetta. Ms. Davies holds an honors degree in history from McGill University, a Master’s degree in Women’s Studies from Oxford University, and graduate diplomas from the Royal Welsh College of Music and Drama, and the Peabody Conservatory.

This is Ms. Davies’ third production with the Summer Garden Opera.